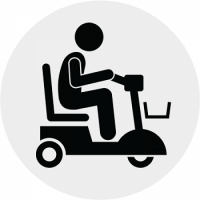 In December 2003, Frisby & Associates, Inc. was hired by a group of manufacturers and suppliers of power wheelchairs to lead media strategy and outreach for their public affairs campaign to change the Medicare coverage policy for power wheelchairs.  The organization is Restore Access to Mobility Partnership (RAMP).  A few weeks earlier, the Centers for Medicare and Medicaid Services (CMS) had issued a new coverage policy that limited Medicare reimbursements to beneficiaries who could not walk a single step in their home.  This new policy would have potentially cost the industry nearly a billion dollars a year since the overwhelming majority of their sales are to Medicare beneficiaries.

Frisby & Associates, Inc. immediately put a human face on the issue, focusing attention on the beneficiaries whose access to this medical equipment was being restricted.   Working with the client, we located a nun in a convent in Pittsburgh whose claim for a Medicare reimbursement was denied. Using our vast media contacts, we talked to a New York Times reporter about the situation. The New York Times published a story about the issue, using Sister Scholastica as a prime example of the people impacted. There was a huge outcry from senior citizens and advocates for people with disabilities, who contacted their congressmen and senators in Washington.  Within weeks after the story was published, CMS notified Capitol Hill that they were rescinding their clarification and would devise a new coverage policy.

Frisby & Associates, Inc. continued to work with RAMP as the organization sought to influence the new coverage policy.  Our media outreach included major stories and mentions by the Associated Press, Wall Street Journal, Denver Post, Washington Post, and many others.  We also produced and aired a video news release that was picked up by more than 212 local television stations across the country and was seen by nearly 10 million viewers.  In addition, a radio news release was picked up by another 637 radio stations, with an audience of 23 million people.

We also worked with PBS to run a Fast Forward segment on the Medicare reimbursement issue.  Moreover, we have booked more than 35 radio interviews on radio stations in major markets across the country.  We have also worked with the trade publications and have had numerous articles published in the journals that are read by Washington policymakers.  One of our key communications vehicles was the publication of our RAMP Report.  These one page newsletters were sent to the Capitol Hill and the news media twice a month to update the media and policy influencers on the latest developments.

Largely because of the media attention on this issue, CMS rescinded their restrictive clarification.